My “Primal Zodiac” sign is the Sugar Glider. That’s what you get when you cross a Sagittarius with a Rabbit. Astrology is basically psychological profiling and I am fascinated and intrigued by the human personality. Much of the Sugar Glider profile is spot on:

“Sugar Gliders long for new experiences in life and get bored with routine fairly quickly….Often they will start projects just to abandon them when something more interesting comes along”

Tell me about it.

I haven’t had time to write much since returning to work, so here is something I prepared early. More than five years ago now. It’s overly verbose, so feel free to abandon it if something more interesting comes along…. 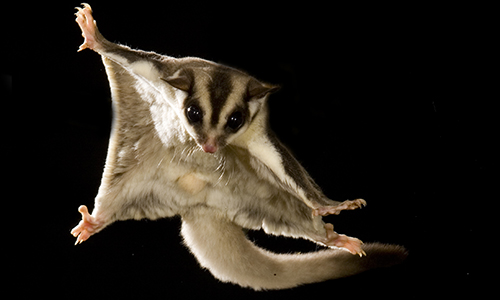 Pure mornings: yesterday. A daft sense of pride and achievement, merely for heeding the obnoxious squawk of the alarm. Further smugness as I silently shut the back door and prance down the back steps with the deftness of a cat burglar. A swelling of spirit as I round the corner and witness the first signs of my city shaking herself to life, unfurling with the kineticism of a budding flower – tenuous in the beginning, but rapidly accelerating.

I approach my first human landmark, the old lady proprietress of the crumbling Mixed Business. Flesh coloured knee-high stockings constrict her varicosed calves, flattening the black hairs under the band. Her feet look oddly hoofed, rubber thongs cleaving her stockinged toes. With surprising vigour, she sluices a bucket of steaming hot water across the footpath, smiling conspiratorially. I feel a sense of camaraderie with this hard-working early riser. Considerately I side step onto the kerb and nod my good morning. It’s a positive start to the day.

Impure mornings: today. I am desperate to be home under cover of darkness. Twenty minutes ago, the first blush of pink in the sky seemed like a cruel joke. A garbage truck doing its morning rounds keeps pace with my slow weave through the narrow back alley, the sound of a million bottles being minced is unnervingly shrill.  I am almost home when I pass the old Greek lady from the corner shop. Dejectedly she slops a filthy bucket of water down the gutter and stares straight past me, looking through the telescope of her wasted life. I feel the burden of her sadness jump on my back as I pass, like a hobo jumping from a train carriage. With intense weariness I drag my wasted body up the back stairs and into a house that feels like a stranger. My shoes hit the floor with the weight of a barbell and the softness of the bed only stands as a counterpoint to the ridiculous ache in my bones. I set the alarm for 9.00am. Soon I will have to call in sick.

I never made that call. I did deals with myself, made promises, hit the snooze alarm with the regularity of a pokie addict on their lucky machine. But in the end, I decided that I would rather lose my job than dial that number. Once the decision was made, a huge boulder was rolled off my chest. Turning my pillow over to the cold side, I abandoned myself to the luxury of a weekday sleep in. But just as it was on the tomb of Christ, the boulder was rolled back on and anxiety robbed me of my sleep. I felt a rising panic fluttering in my chest, like a lost bird trapped inside a house. Suddenly I needed to be up.

As a seasoned hangover survivor, I have come to recognise a pattern in the physiology of the sickness. Usually I have a nausea-free grace period when I first get out of bed, a small window of time that will allow me to do an inventory of my possessions: wallet, jacket, keys. I’ll put a coffee on, take out the garbage and if I’m lucky, pick my clothes up off the floor and hang them on the back of the chair. But it all comes unraveled in the shower. It’s the heat. The infernal heat and steam, massaging me to the brink of regurgitation. I know myself well enough to keep a bucket in the shower to catch my waterfall vomits.

Once I’m well enough to hold down a piece of vegemite toast, I take to daydreaming on the verandah. Taking an under used country lane in my mind, I meander onto the topic of stand-up comedians. They worried me. What kind of bizarre confidence did they have in their own being? Where in this lifetime did they find the guts to do what they did? It scares me to imagine myself in that role. I imagine myself pacing around the backstage area – waiting to face the audience. I can hear the clapping from the last act before me. There’s a harried stage manager with a clipboard and a headset impatiently motioning for me to go on. I stop short of stepping out into the light and making eye contact with the front row because my heart is racing to fast too go on with the inane fantasy. I decide that I’d need a lot of alcohol to be a stand-up comedian. Come to think of it, I need a lot of alcohol to do anything.

It was getting later in the afternoon and I was probably at the peak of my remorse period. For the first half of the day I’d been too sick to feel anything other than a blind desire for the pain to go away. After throwing up in the shower I was completely devoid of energy  – I couldn’t even stand up straight to brush my teeth at the bathroom sink. I basically crawled back into bed and fell asleep in my towel, after gulping and gagging on 4 Nurofens. My phone rang four or five times, but I ostriched it under my pillow.  The grinding wheels of guilt finally gave me the momentum needed to propel myself out of bed. First thing is always to make the bed. Even if the rest of the room is in total disarray, a made bed brings order to the room. Like a neat and tidy tugboat in a rubbish strewn harbour, my little bed floated on the shabby, blue bedroom carpet. The process of discarding the pillows and shaking out the sheets had uncovered my phone, wallet and one sock. The tiny screen on my embarrassingly outdated phone showed 5 missed calls and 3 voice messages, but  was shelved for later digestion. The wallet revealed something altogether more unusual – a neat and very thick wad of slippery yellow notes. Fifties! Maybe 20 of them. My fuzzy head couldn’t handle any kind of guesswork, so I had to take the wad out and count it with the deliberation of a teenage teller. 50, 100, 150, 200, 250, 300…. two thousand dollars.

A ridiculous thought flashed through my mind that maybe it wasn’t my wallet. Somehow a switch must have happened at the bar and I was holding a rich mans wallet. But I quickly realized how stupid this was, as the wallet also contained all of my personal effects – my cards and tickets, receipts and business cards – the random sort of life litter that accumulates in wallets and bags. Not to mention that it was the very same shabby leather disgrace that I’d been welding into my body shape for the last ten years. It’s hardly likely that I could have accidentally switched that for the class of wallet that would contain $2000 dollars in a neat wad of fifties.

So the wallet was definitely mine, but the money wasn’t. This situation called for cigarettes and coffee.

Sitting back in my favourite reflective spot, an upturned milk crate in the shady corner of the tiny stone balcony, I began to retrace my steps. It was something that my Mum had taught me when I was young and I often returned to it. She’d tell me to close my eyes, and then with her hands she’d mold my hands to mimic holding something round and soft. That was my big ball of wool. She’d say “Imagine that everywhere you go in one day is traced out in this big ball of knitting yarn, criss-crossing your path from bed, to bathroom, to kitchen, to bus stop and so on and so on, all day long. Now, the very spot where you stand right now, you are holding the end of the wool. Follow that trail of wool back and you will find what you are looking for”. The end of my piece of wool was wrapped around two thousand dollars and I needed to trace it back. I must have fallen asleep with the wallet in my pocket and it fell out in bed, or perhaps I threw it on the bed before climbing in, and that’s how it ended up tangled in the sheets. Either way…it was there that I found it.  So when was the last time I used the wallet? I can’t remember paying a cab driver…no, that’s right – I walked home. I’d been having what could only be loosely defined as a “conversation” with some Bukowski barfly wanna-be at the Sly Fox, and I’d used the excuse of needing a cigarette to get some relief outside. That’s when I realized that it must be dawn already. I felt the safety of the deep night bleach away from me and the cigarette that I had been savouring suddenly tasted foul. I knew that my jacket was still hanging over the back of a chair inside, but considering that my wallet, keys and phone were on my person, I decided that the jacket would have to be collateral damage. A riff on the old “rather chew my own arm off”. From there it was a short stumble home, my objective to arrive home under cover of darkness. Or at least dawn-ness. I would need to follow the wool back further.